The Benefits of Social Media for Seniors 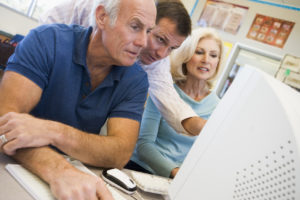 As people age, they can often experience a sense of isolation, but social media can help older adults stay connected and share interests with others. There is a growing number of seniors who are participating in social media sites, and they have found that these sites are ideal for keeping in touch with friends and family, staying involved in the world, and simply having some fun.

According to a 2010 poll by the Pew Research Center, social media use among people 50 and older nearly doubled in recent years, rising to 42 percent from 22 percent during the year prior to the poll. Today, at least one in four seniors 65 and older use social media. In one year alone, AARP went from 60,000 fans on Facebook to more than one million.

Researchers have found that social media actually has many benefits for seniors. According to a recent study published in Gerontology, seniors gain a great deal of enjoyment from social interaction on sites like Facebook and Twitter. For seniors, the importance of socializing and staying connected is paramount to their emotional and physical health. Especially for those who cannot get out of the house to be with others, social media provides the opportunity to make friends, congregate without leaving the house, and never be alone. Additionally, a research study recently published in Computers in Human Behavior discovered that, compared with non-gamers, seniors who indulge in casual games on social media sites report less depression and better well-being, health, and social functioning.

Research published in the International Journal of Human-Computer Studies found that using Facebook improves relationships between grandparents and their children and grandchildren. More and more seniors are realizing that going where their family members are going (most frequently Facebook) makes it easier to link up and keep up with what is going on in the lives of loved ones. It also makes for more frequent and comfortable conversations between generations than most would experience with phone calls. The study also showed that seniors began talking more frequently about a wider variety of topics, as their social media interactions gave them common things to chat about. They also began keeping in touch regularly and visiting each other more often.

Another benefit of social media includes family photo and video sharing. With the majority of photographs now digital, sharing of memories has become easier than ever through social media. Today, grandparents can go online and see photos taken only seconds before by their grandchildren, and this creates a feeling of closeness that was never possible in years past when photos had to be mailed. Seniors are also watching a variety of home movies on YouTube, Facebook and other sites. They can enjoy watching their grandchildren “doing what grandchildren do” and get a glimpse into their everyday lives regardless of whether or not they live close by.

According to Tammy Gordon, vice president of social media for AARP, there are a few caveats for seniors who want to become involved in social media. “Be prepared to regularly update your privacy settings so you’re not sharing more information than you would like, and be on your guard against online scammers who sometimes use social media to prey on the unwary,” she warns. “Also realize the only thing that is consistent about social networks is they’re constantly evolving, and users need to be aware of these changes and be committed to staying current so you can update your privacy settings to the level you’re comfortable with.”

With these caveats in mind, seniors should explore everything that social media has to offer. Currently, Facebook is the king of social media sites, as it allows users to look up and connect with friends and relatives, and also lets families stay in touch with what is going on day-to-day. The One Senior Place Greater Orlando Facebook page, for example, has photo, video, event, and review sections, as well as opportunities for seniors to sign up for email updates, view posts and find out about all of the services One Senior Place has to offer.

Another engaging social media site is Pinterest, which allows users to share photos of things that interest them, which in turn leads to conversations. The social media site LinkedIn focuses on connecting professionals to one another, allowing them to network, and because most people in their 50s and 60s are still working, this is a great place to interact and find news.

The benefits of social media for seniors are boundless. Whether using social media for entertainment, research, learning, keeping in touch, sharing, meeting others, or even taking advantage of sales and online opportunities, seniors have a treasure trove of fun and interesting digital tools at their disposal. And this is helping them stay connected, happy, and healthy.

For more information on social media for seniors, staying connected in your local community, and other issues pertaining to seniors, contact One Senior Place at 866-706-9386.

Stay up to date with One Senior Place
FOLLOW US