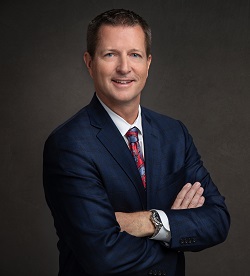 Why do you want to become a Judge?  For me, it is about public service. I have been successful in my legal career as a private attorney and would like to give back to the community again.  Additionally, Brevard and Seminole County’s citizens deserve to have exceptional judges.

What experience do you have as an attorney that makes you the best candidate?  I have been practicing law for over 17 years, whereas my opponent has only been practicing about 8 years.  I have a very broad range of legal experience in many different areas of law, including civil, family, dependency, delinquency, and criminal. I have done over 50 jury trials to verdict and over 100 non-jury trials.

What would you like to see accomplished while you are in office?  I would like to see our judiciary take a more active role in the community.  Due to the strict Judicial Canons, judges are prohibited from attending or participating in partisan events and other types of events.  However, there are many other opportunities for judges to be involved in the community, including meeting with constituents and educating the public on how our judicial systems works.

It is critical that people have access to the court system in a timely manner in order to seek justice and resolve disputes. I would strive to ensure cases move more quickly and efficiently.  The pandemic has exacerbated this issue, so I would like to see video-conferencing technology better used to alleviate this problem.

What is the most significant case that you worked on as a lawyer?  Since I have handled over 10,000 cases, I cannot pick one case that is most significant to me. To me, every case I have worked on has been significant, as it not only personally affects the person or party I am representing, but also their friends and family.

Short Biography:  Steve grew up in Cocoa Beach, Florida and attended Freedom 7 Elementary School.  Steve’s dad, George, was an Army veteran with the 82nd Airborne and a highly respected engineer for McDonnell Douglas (Boeing). Steve’s dad was one of only three engineers selected to assist Japan in a joint United States/Japan space program.  Steve spent eight years in Nagoya, Japan and received his high school diploma from Nagoya International School.

Upon Steve’s return to the United States, Steve attended the University of California, Los Angeles (UCLA), where he earned his Bachelor’s degree in Economics.  While at UCLA, Steve was in Army ROTC and attended Camp Challenge at Fort Knox, Kentucky. Steve also worked three jobs, including working as a tour guide using his bilingual skills. Upon graduation from UCLA, Steve moved to Seattle, Washington taking a job in international trade.  Steve’s unique skill set allowed him to effectively introduce numerous American products and services into the foreign market place.  While working full time and raising a family, Steve attended law school at Seattle University School of Law where he received his law degree with honors.  While in law school, Steve was involved in several pro bono legal clinics, including assisting victims of domestic violence.

Steve passed up financially lucrative jobs to return to his hometown of Brevard County and accepted a position with the Public Defender’s Office of the 18th Judicial Circuit in Brevard and Seminole County.  Steve worked as an Assistant Public Defender for the 18th Judicial Circuit for over 6 years, where he represented thousands of Brevard County residents.

Steve has always maintained an extremely hard work ethic, putting himself through college and law school. In 2010, Steve started his own law practice. Steve built a thriving law practice from the ground up and two years later, Steve’s wife Maria, who is also an attorney, joined him at his firm.  Steve has represented clients in nearly all circuit court matters, including dependency, delinquency, criminal, family, and civil.  Steve also expanded his practice into federal court.

While his legal career has been gratifying, Steve’s greatest joy is his family and the time spent with them.  Steve lives in Viera with his wife, Maria. Together they have five children; Michael (22), Kayla (20), Karsten (20), Ryan (13), Mckenzie (10), and a chocolate lab, Kito.  Steve and his wife Maria volunteer extensive time representing law enforcement officers and their families in court.  Steve’s mom, Stephanie, still lives in Cocoa Beach and even at the young age of 85 is an active real estate agent. Steve lost his dad in 2002, after a courageous battle with cancer.  Knowing that life is precious and unpredictable, Steve appreciates everyday he spends with his family.

What sets Steve apart is not only his extensive trial and courtroom experience, but his life experiences. Those experiences allow Steve to better understand and relate to the citizens that may appear before him if he is elected. Steve is passionate about public service.  He has chosen to give up a financially lucrative career as an attorney so that he can continue with his desire to serve the citizens of Brevard and Seminole.