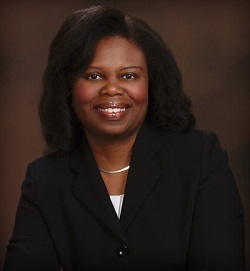 Why do you want to become a Judge?  Being a judge is a position of responsibility and service to the community.  This is something that I have spent a lifetime doing, as early as my days as a Girl Scout, and it is what I would like to continue to do as our community’s next Circuit Court Judge.  Roughly half of my legal career has been as a prosecutor/plaintiff’s attorney in civil and criminal cases. The other half  of my career has been representing defendants in  both criminal and civil cases. My experience spans both the public sector and the private sector and includes having tried numerous cases covering a wide array of legal issues over the last 24+ years.   This experience has uniquely prepared me to serve as a judge because I am able to fairly comprehend a case from both sides of the issue.

What experience do you have as an attorney that makes you the best candidate?  In addition to my previous answer, I would add that Circuit Court has several divisions: Family, Criminal, Juvenile, Probate, Civil, and Dependency.  Judges review and issue arrest warrants, search warrants, injunctions, and more.  Although my specialty is criminal law, I have experience in all of these other areas by virtue of having practiced law for more than 24 years.  Circuit judges also have to manage a very large caseload.  My years of experience in the public sector required me to manage dockets with hundreds of cases which included carrying an individual caseload of more than 100 cases at any given time.  Judges must be able to do this effectively and efficiently and must possess the work the work ethic required.  I have worked since I was 16 years old.  I worked while I was in college and in law school; and many people who know me from my early days as a prosecutor, also remember that I spent the first 4 years of my career also working a second part-time job for AMC Movie Theaters.   People thought I was crazy.  What they didn’t know was that my starting salary as a prosecutor in 1995 was $21,634.80.  We got a $2,000.00 raise after passing the bar exam.  I made almost half that working part time for AMC.   Work ethic is not foreign to me.

What would you like to see accomplished while you are in office?  As  judge, I would like to make sure that hearing time is available and that, at least my courtroom, is accessible so that the court system does not incur an insurmountable backlog (which was already happening before COVID-19 in some courtrooms).  In today’s environment, that means increasing the use of virtual technology for non-evidentiary hearings where possible.  It also means working with the Clerk of Court, law enforcement, the State Attorney’s Office and the Public Defender’s Office to develop a way to address criminal cases rather than having accused individuals waiting indefinitely.   A process for civil jury trials will also have to be addressed.  Many litigants simply cannot afford to wait indefinitely for justice.

What is the most significant case that you worked on as a lawyer?  The most significant case I worked on as a lawyer was when my dad was arrested for the first and only time in his life, at the age of 61.  He was wrongly accused and I got the charges against him dismissed after five months of what had to be a nightmare for a man who always worked so hard and was known as “By-the-book Bob.”  I later filed a federal lawsuit and recovered much of the salary that he lost during those five months while his case was pending.  I invite you to visit DonnaGoernerforJudge.com to read more about this case, which I have published with my parents’ permission.  You will find it on the About page by clicking on “More About Donna.”

Short Biography:  Attorney Donna M. Goerner was born and raised in Jacksonville, Florida and has been practicing law for nearly twenty-five years. After graduating from what was the only public college preparatory school in the southeast at the time, (Stanton College Preparatory School), Ms. Goerner attended the University of Florida where she earned her A.A., her B.S. in finance, and her J.D. (law degree). She enjoys telling everybody that she is a Triple-Gator, and has been Gator football season ticket holder for more than 20 years. She also enjoys cooking and singing. She sings in the choir at her church where she has been a member since 2000.

Professionally, Donna Goerner served twelve years as an Assistant State Attorney with the Seminole County State Attorney’s Office in Sanford, Florida and won the Irving Awerman Outstanding Trial Attorney of the Year Award from the State Attorney’s Office in 2001 and 2002. Ms. Goerner was also a felony Division Chief, responsible for supervising other attorneys in addition to prosecuting cases. Ms. Goerner has been featured in the public media on multiple occasions for prosecuting high profile crimes including a UCF professor accused of unlawfully using his computer to lure a twelve year old girl for sex; a man accused of attempting to kidnap a four year old girl and her sister; and a Seminole County teacher accused of abusing her autistic students. Each of those cases resulted in felony convictions.

Ms. Goerner left the Seminole County State Attorney’s Office in 2007 and opened her own office in Altamonte Springs and now serves the individual needs of Central Florida residents. In addition to being licensed in Florida, Ms. Goerner is licensed in Pennsylvania and Washington D.C. and is also admitted to practice before the United States Middle District of Florida, the United States Florida Middle District Bankruptcy Court and the United States Eleventh Circuit Court of Appeals in Atlanta, Georgia. She became a Board-Certified Criminal Trial Attorney in Florida in 2012 and is only one of 443 attorneys in the state to hold this designation. Ms. Goerner is also a member of the Seminole County Inn of Court and currently serves as its Ethics chairperson and is a current member and past President of the Paul C. Perkins Bar Association, and is a member of the Seminole County Bar Association.

Ms. Goerner provided radio commentary during the Trayvon Martin and Casey Anthony trials and has been quoted in the news on various cases and subjects from criminal cases to issues regarding diversity of judges serving in Seminole County.