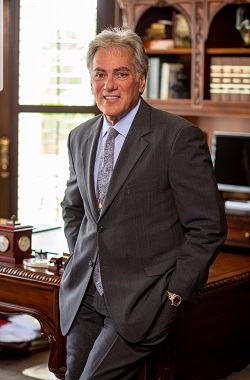 Why do you want to become a Judge?  I want to become a Judge because I have, in my 34 years of practicing law, acquired intimate knowledge of, and respect for, the United States and Florida Constitutions, the Florida Statutes,  the Rules of Civil and Criminal Procedure and relevant caselaw.  I intend to follow the letter of the law in making rulings that are fair and just with particular attention to protecting our communities and our citizens.

How long have you been a resident of Brevard/Seminole County?  I have been a resident of Brevard County for a total of 41 years.  I originally resided in Titusville for 7 years during which I attended Jackson Jr. High, attended and graduated from Titusville High School and then began my college career taking classes at Brevard Community College (now Eastern Florida State University).  I then enlisted in the United States Army for a three year tour as a Military Intelligence Analyst and was stationed at Fort Bragg, North Carolina.   I then moved to Miami, where I obtained a Bachelor of Science Degree, Cum Laude, in Criminal Justice, at Florida International University.  That degree led me back to North Carolina to attend Campbell University School of Law where I met my lovely wife, Sheri.  During my higher education, I remained in service to our country as a Ready Reservist, until ultimately receiving an Honorable Discharge in 1984.  After graduating from Law School, I returned with my young family to beautiful Brevard County where I have lived, primarily in the Melbourne area, ever since.

What experience do you have as an attorney that makes you the best candidate?  My legal career began in the civil arena, practicing personal injury, worker’s compensation, landlord/tenant disputes and family law.  I have argued civil cases in the County and Circuit Courts of the 18th Circuit as well federal cases in the United States Middle District Court.  I found that I had a zeal for Criminal Defense work and have participated in several hundred Jury Trials.  I have appeared in courts throughout the State of Florida before countless Judges in civil and criminal matters ranging from traffic infractions to first degree murder.

What would you like to see accomplished while you are in office?  I hope to enhance the reputation of the Group 15 Circuit Court Judge as one of integrity, fairness, and justice for all.

What is the most significant case you have worked on as a lawyer?  In 1989, Jeffrey Alan Schwartz was accused of raping a neighbor child, who identified him as her rapist.  Mr. Schwartz was facing life in prison on this charge.  Mr. Schwartz vehemently denied any inappropriate contact with his neighbor.  In 1991, I moved the Court to order a DNA test on my client, DNA testing only recently having been shown to exclusively identify a person.   The DNA test came back and it was proved that my client was NOT GUILTY.  The DNA obtained from the victim was later used to positively ID the actual rapist.  My client would likely have spent the remainder of his life in prison for a crime which he did not commit.  DNA testing is now routinely used in rape cases and other crimes.