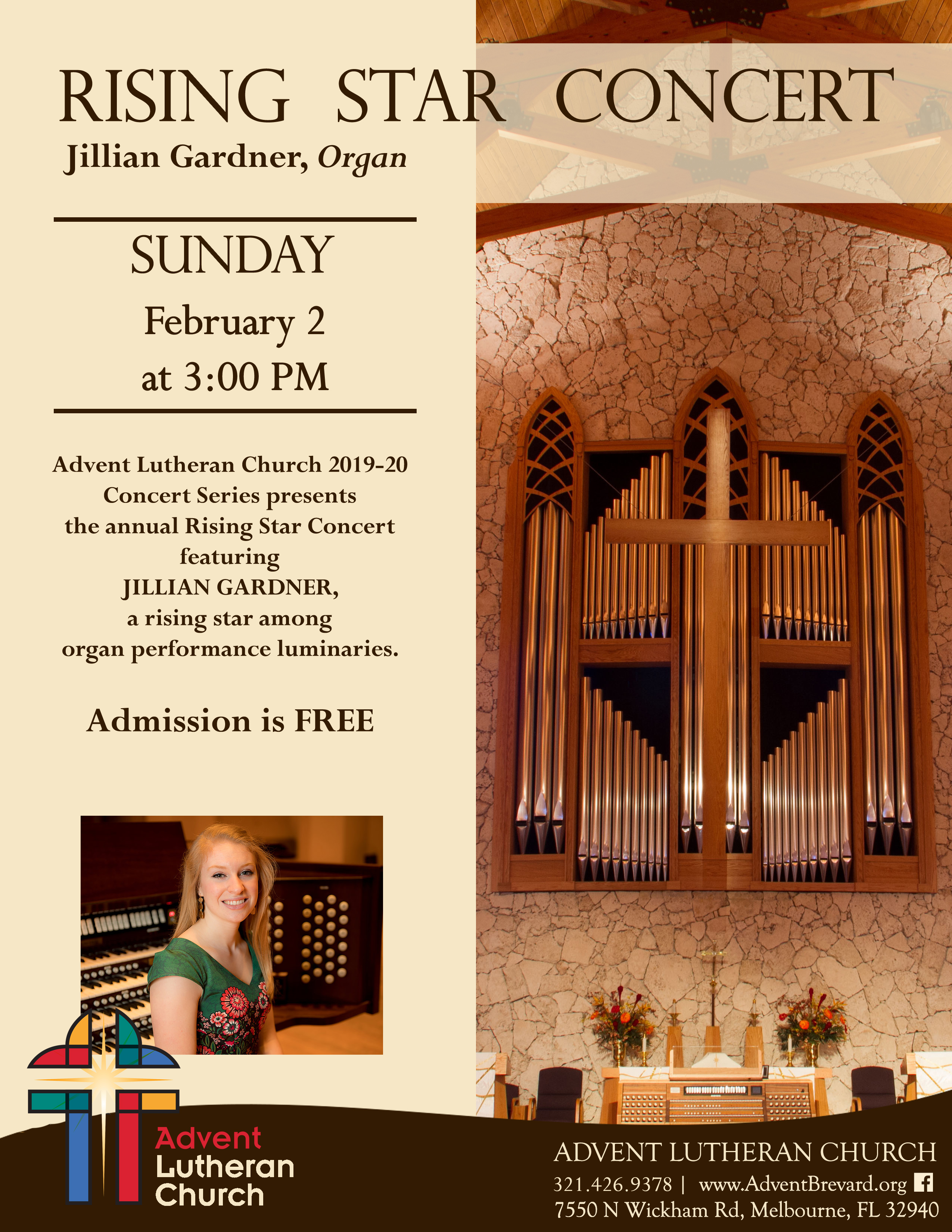 For more information about the Rising Star performance in Suntree, visit AdventBrevard.org or call (321) 426-9378.

A New Yorker in Alabama, Jillian Gardner will be the featured performer in the Rising Star pipe organ concert at Advent Lutheran Church in Suntree on Sunday, February 2 at 3:00 PM.  Currently the Director of Music at First United Methodist Church in Huntsville, Alabama, Gardner is looking forward to entertaining the audience with a performance on the American-made A.E. Schleuter pipe organ of 36 ranks and 2,196 pipes at 7550 North Wickham Road, 32940.

During the concert to be performed in her signature pink sequined organ shoes, Jillian Gardner will dazzle with works by composers J.S. Bach, Claude Debussy, César Franck and others. Gardner began her study of the organ at age 14 and completed a bachelor’s degree in Organ Performance from the prestigious Oberlin Conservatory. She received her Master’s degree in Organ Performance at Baylor University in Texas.  An acknowledged Rising Star in the organ performance world, Ms. Gardner is no stranger to the organ competition circuit. She twice took first place in the Regional Competition for Young Organists and was a finalist in the 2015 Arthur Poister competition in Syracuse, New York, as well as second prize winner in the 2017 Québec organ competition in Québec, Canada. Gardner has been an active recitalist across the United States, Canada and the United Kingdom, performing recently in London’s St. Paul Cathedral, St. Alban’s Cathedral and Westminster Abbey.  In 2015, Ms. Gardner was in the inaugural group named to The Diapason magazine’s Top 20 Under 30, a feature that annually recognizes some of the most successful young talents in the field of organ performance. In addition to concertizing, the Rome, New York native maintains a busy schedule as primary organist at First United Methodist Church in Huntsville, where she oversees more than 10 ensembles for adults and children.

For more information about the Rising Star performance in Suntree, visit AdventBrevard.org or call (321) 426-9378.