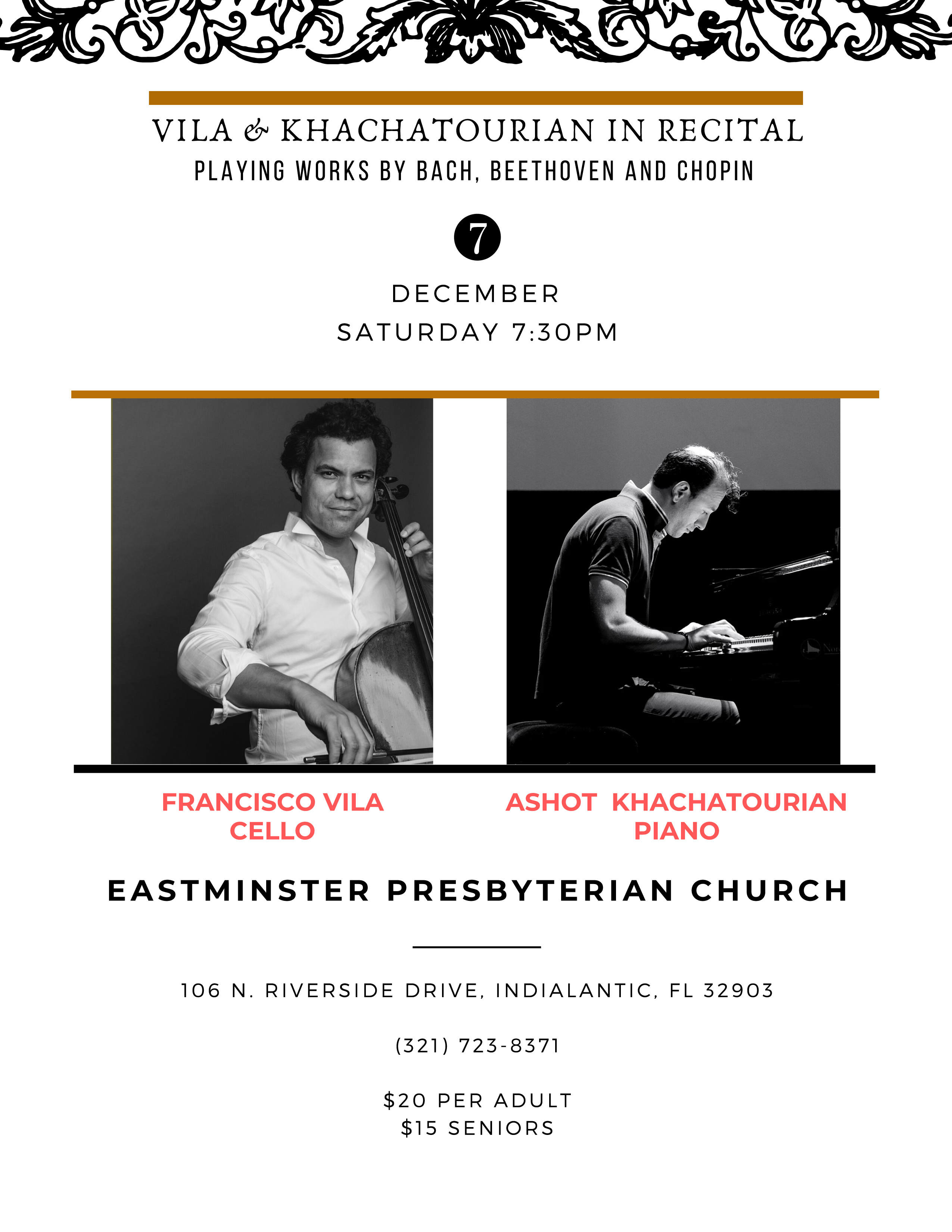 An Ecuadorian-Spanish cello sensation and a Armenian-born, Belgium-based pianist will come together in a single Indialantic performance on Saturday, December 7 at 7:30 PM.  Cellist Francisco Vila, who was born in Ecuador, grew up on the Space Coast and now resides in Los Angeles, will join pianist Ashot Khachatourian for Vila & Khachatourian in Recital, a concert of classical works by Bach, Beethoven and Chopin at Eastminster Presbyterian Church at 106 North Riverside Drive in Indialantic.

Both musicians concertize internationally and have won numerous individual prizes and competitions. Vila is co-founder of Ecuador’s Festival International de Música de Esmeraldas and serves on the faculty at the Longy School of Music of Bard College in Cambridge, Massachusetts. He performs on a fine 1790 cello crafted by Vincenzo Panormo. Ashot Khachatourian is the creator and artistic director of the Belgian YSAYE International Music Competition and comes from a musical family. His great uncle, Aram Khachaturian, was one of the foremost composers of the 20th century, whose music bore the stamp of his Armenian roots. Recording artist and pianist, young Ashot has earned his own celebrity as one of the world’s foremost interpreters of the concertos of Rachmaninov. Francisco Vila and Ashot Khachatourian will perform individually as well as together during a program that offers famous pieces from the repertoire for cello and piano.  The audience will recognize the Chopin Sonata for Cello and Piano, which is the only such sonata the composer wrote — and the last piece he performed publicly before his death.  Khachatourian will perform Chopin’s Ballade No. 1 for solo piano and the pair will also perform the Beethoven Sonata No. 2 for cello and piano. The duo will play additional pieces, in what promises to be a captivating program featuring two of this generation’s most exciting young musicians.