Though she’s made art since she was three years old, Kahl got her first gallery show last year at the Doyen Gallery in Altamonte Springs.

Taking it’s name from the word for a senior expert, the gallery is a single room located in One Senior Place, a facility for services for the aging community. “It’s a pleasant place within One Senior Place for people to come and sit and relax,” said founder Linda Taylor. 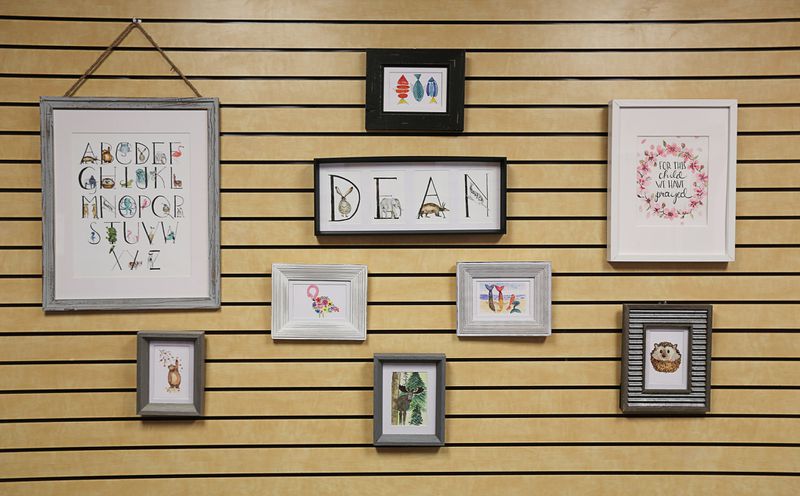 The artwork of Apopka artist Jodi Acevedo is on display at the Doyen Gallery at One Senior Place in Altamonte Springs. (Ricardo Ramirez Buxeda / Orlando Sentinel)

“The mission of the Doyen Gallery is to promote awareness of the capacities of elders,” said Taylor. “They’re capable of a lot more than we give credit for.”

Taylor, 48, is a financial planner with an office in One Senior Place. She began volunteering with a program called Songbird, for which middle school children create music playlists for patients with dementia.

“We felt it was important that kids really learn empathy,” said Taylor. “We have a tsunami of people who are aging into retirement and old age and we are not a culture that pays attention to that.”

Taylor and her mother had the idea for the gallery after coming across a program called Memories in the Making. Patients in the early stages of Alzheimer’s Disease work with their caregivers and volunteers to paint.

“It is a good environment for them to do other types of activities, in this case, art that really stimulates their brain and brings some creativity you might not see otherwise,” said program manager Dama Melendez.

While this therapy has been shown to aid in memory retention, Melendez notes that it’s often therapeutic for the caregivers just to see their loved one create. “This is an opportunity to see this person express themselves,” she said.

In 2017, Taylor wanted a place to show off what the seniors were making and asked One Senior Place founder and CEO Don Kramer for some space. “I love it,” said Kramer. “The concept of music and art as kind of a short cut back into what’s left in the brains of people with dementia has always been extremely interesting to me.”

After the first show, other artists approached Taylor to ask if they could be showcased.

Many of these artists had no formal experience until after retirement. “It was actually boredom,” said watercolor painter Jodi Acevedo. She had been diagnosed with cancer in 2016 and was undergoing treatment. “I was lying in my bed, tired of TV, and I said, ‘I’m going to try this.’ What could I lose, besides a couple of sets of sheets?”

Though the gallery is a nonprofit organization, it has gotten exposure for the artists, who have gone on to make things commercially. “I do cities now,” said Acevedo. “Orlando and College Park, I do neighborhoods. It’s been very, very successful.”

Kahl does artistic calligraphy for everything from wedding invitations to calendars and banners of Broadway shows. “It’s fun,” she said. “Nothing hard about it at all. If you’re blessed with the gift, as I feel I was, then use it. Help other people to lift their spirits up.”

For Taylor, a lot of the draw is the stories that have come from meeting the artists. “We didn’t realize the goldmine we would be tapping into on people we would get to know and the backstories,” she said.

One of the first artists was a man who painted while he was in hospice care. Another series was from a disabled man who painted with the brush in his mouth. “We’ve had a pretty diverse group,” said Kramer, 66. “It’s fascinating because they’re off the beaten path.”

Stories are a big part of why Melendez encourages seniors and their caregivers to make art. “I would venture to say it gives them a sense of hope, because it’s another way to treasure individual histories,” said Melendez.

In addition to the individual artists, Memories in the Making gets an annual exhibit now, with the next one happening in September.

Each of the artists sees in the gallery a value for everyone. “It also lets me know that, at 60, I can still be productive in the community,” said Acevedo.

“You can see here that there are people who are 50 and up that have these talents and they’re using them,” said Kahl. “They’re having a good time and they’re aging gracefully because of it.”