Ask One Senior Place: Lewy Body Dementia is a brain disease with an unknown cause 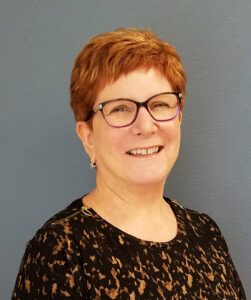 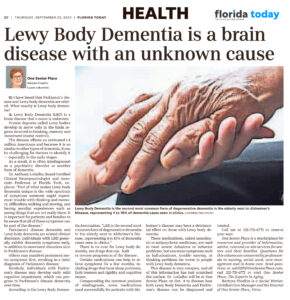 A:  Lewy Body Dementia (LBD) is a brain disease whose cause is unknown.

The disease affects an estimated 1.4 million Americans and because it is so similar to other types of dementia, it can be challenging for doctors to identify it– especially in the early stages.

As a result, it is often misdiagnosed as a psychiatric disorder or another form of dementia.

Dr. Anthony LoGalbo, Board Certified Clinical Neuropsychologist and Associate Professor at Florida Tech, explains more.  “Part of what make Lewy body dementia unique is the wide spectrum of symptoms someone might experience: trouble with thinking and memory, difficulties walking and moving, and having peculiar experiences such as seeing things that are not really there. It is important for patients and families to be aware that all of these symptoms can be part of the disease.”

Others may manifest prominent motor symptoms first, resulting in a (mis)diagnosis of Parkinson’s disease.

According to the Lewy Body Dementia Association, “LBD is the second most common form of degenerative dementia in the elderly next to Alzheimer’s Disease, representing 4 to 16% of dementia cases seen in clinics.”

There is no cure for Lewy body dementia, nor drugs that can halt or reverse progression of the disease.

Certain medications can help to relieve symptoms for a few months, including drugs that treat sleep problems, limb tremors and rigidity and cognitive issues.

Compounding the common problem of misdiagnosis, some medications used successfully for patients with Alzheimer’s disease may have a detrimental effect on those with Lewy body dementia.

These medications, called neuroleptic or antipsychotic medicines, are used to treat severe delusions or behavior problems, but can make symptoms such as hallucinations, trouble moving, or thinking problems far worse in people with Lewy body dementia.

This disease is very complex, and all of this information has just scratched the surface.  Dr. LoGalbo will be at One Senior Place on October 4th to discuss how both Lewy body dementia and Parkinson’s disease can be diagnosed and treated.

One Senior Place is a marketplace for resources and provider of information, advice, care and on-site services for seniors and their families. Questions for this column are answered by professionals in nursing, social work, care management and in-home care. To submit a question, send an email to askOSP@OneSeniorPlace.com or visit One Senior Place, The Experts in Aging at OneSeniorPlace.com. Barbara Fradkin is a Social Worker, Certified Care Manager and the Director for One Senior Place, Viera.